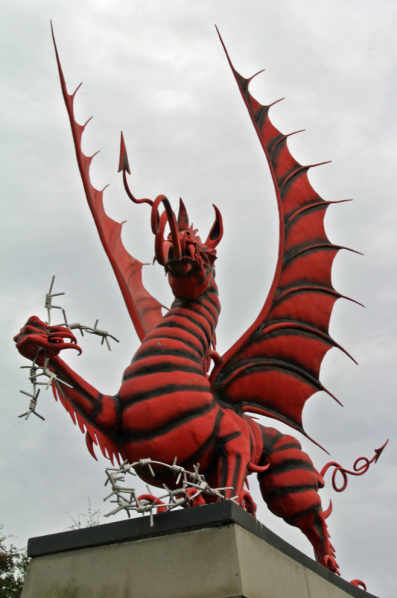 The Welsh dragon on the First World War memorial to the men of the 38th (Welsh) division at Mametz Wood.

Today is St David’s Day, the national day of Wales, and it seems an appropriate moment to post what remains perhaps my very favourite story among all the thousands of strange tales that I have read.

That is a large claim – I tend to read a fair bit – but I still find what follows so surreal and so magical, in its combination of the gentle, the mundane and the extraordinary, that for me each reading is like immersing myself in a warm bath. All right, it’s pretty hard to credit that it’s literally ‘true’; it helps that it’s a Welsh story, and that I’m a proud Welshman – and that the tale remains all but unknown; the account first appeared in print in 1928, and so far as I can tell has never made it onto the Internet. The names of the characters involved are so common that it would be extremely difficult to check if they were actually real or not; Radnor Forest, though, is real – and is, according to local legend, the place where the last Welsh dragon still lies sleeping (Daniel Parry-Jones, A Country Parson. London: Batsford, 1975). The strange stamps you’re about to read of did exist. No other comment is possible – but then perhaps none is necessary.

Here, then, is the story as I first read it – it is based, as mentioned in the first lines, on an article originally published in the 1920s in a children’s stamp magazine [The Stamp Lover, 1928 p.274]  The best thing to do is simply to sit back and enjoy.

Natives of the Red Dragon

A curious article, ‘The Red Dragon Stamps’ by C.H.R. Andrews, appeared in a journal called The Stamp Lover. Apparently, collectors had been mystified over the previous months by the appearance of certain small denomination British stamps overprinted with a red dragon. Some 20 letters and postcards were known to exist, all having pairs of stamps, the left one of which bore the overprint. Invariably, both were cancelled, although only the normal one could pay postage. At the time of writing, none had been reported for nearly two months.

The first of these stamps was reported shortly after the disappearance of Rhys Evans, 71, a well-known Welsh book collector and expert. Evans left home in Sketty, Swansea, on the afternoon of 4 April 1928 to show his friend, Professor Jenkins of University College, a very old Welsh book of stories and legends, which he carried in a waterproof wrapper. It included an account of a secret sect or clan responsible for the guardianship of five sacred dragons, and a crude plan which Evans hoped his friend would decypher.

Evans never reached the college, a short walk away. Two days later, his wife received a letter from Cardiff, bearing a pair of penny ha’penny stamps, one of which had the dragon overprint. The message, in Welsh, told her not to worry, as her husband was quite well, and it bore what was undoubtedly his signature. The note ended with the words Trigolion y Ddraig Goch, ‘Natives of the Red Dragon’. Various people subsequently received letters from the group, all bearing dragon stamps and all referring to old Welsh articles. The postmarks were from Cardiff, Cardigan, Wrexham and various towns on the sites of old Roman camps.

Evans turned up five days later, sitting by a lake in Brynmill Park. He was in good health, and would give no explanation of his absence. The ancient book was missing, and he seemed unconcerned about its loss, which was quite out of character. He stated enigmatically that “there were dragons in Wales today,” but refused to elaborate.

Coincidentally, a report from Llandegley, near Radnor Forest, stated that three children saw a huge beast in the woods, and that one, bolder than the rest, attempted to follow it. His way was blocked by two men who escorted him part of the way home. They were dressed in white with red dragons emblazoned on their chests.

14 thoughts on “Natives of the Red Dragon”